BRIGHTON OLDHAM 3 0 ETER TAYLOR took the first tentative step towards rebuilding his shattered reputation yesterday. But his presence in the dug-out proved sufficiently inspirational, as a Paul Rogers strike and two more from the impressive Lee Steele saw Oldham overwhelmed. Taylor's mission on the south coast is to build on the foundations laid by his predecessor Micky Adams and win a second successive promotion. After Rogers had fired Brighton ahead, stabbing past Gary Kelly from close range at the second attempt, Steele made it two in the 13th minute with the help of a hefty deflection.

Bristol City 0 Wycombe 1 Martin Taylor then made a fine save to keep out Steve Jones' right-foot effort shortly after.

STOKE CITY manager Gudjon Thordarson believes the fans can give his team an edge in this afternoon's Potteries derby at Vale Park.

BATTLING 10-man Wrexham piled the pressure on Wigan manager Paul Jewell with Craig Faulconbridge winning it for the visitors near the end. Wigan went ahead with Tony Dinning's 33rd-minute penalty, but Keith Hill equalised 11 minutes later. 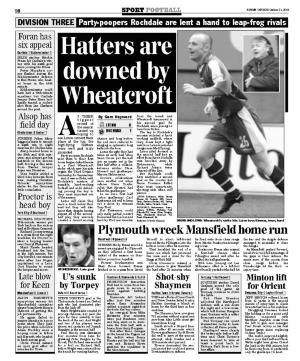 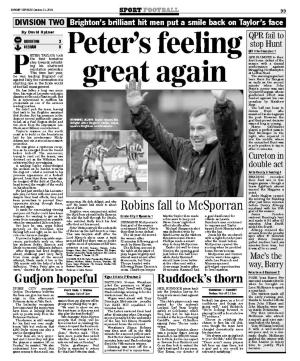