Wizardry to keep you spellbound

LORD OF THE RINGS: THE FELLOWSHIP OF THE RING (PG) HHHHH Director: Peter Jackson Stars: Elijah Wood, Ian McKellen, Viggo Mortensen, Sean Bean, Liv Tyler H Dismal HH FILMS Dodgy HHH Good lucidly explains the history of the Ring and the circumstances leading up to its inheritance by Frodo, then we are off, witnessing first the pastoral idyll of the hobbits and the shire, at a birthday party for Bilbo Baggins (Ian Holm). It is a world that is soon to have a vast, evil shadow hanging over it. A learned wizard, Gandalf (Ian McKellen) , discerns the threat to the Ring and thus begins Frodo's mission, at first just with his best friend Sam (Sean Astin) for company. Indeed, many young children c Aould be genuinely scared by the movie - the army of twistedfaced orcs is especially gruesome - but too many recent fantasy films about good and evil, like Harry Potter and The Phantom Menace, fail to conjure up any sense of either.

Out now on video and DVD

F IT'S wizardry you're after, forget the workmanlike Harry Potter and rush to this stunning adaptation of Tolkien's classic. In Fellowship Of The Ring, the stakes are much higher but the issues dealt with are the same. 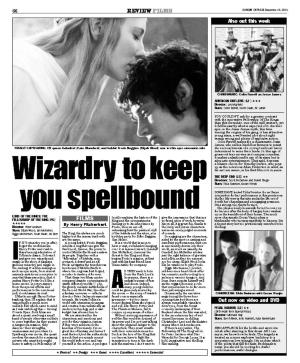 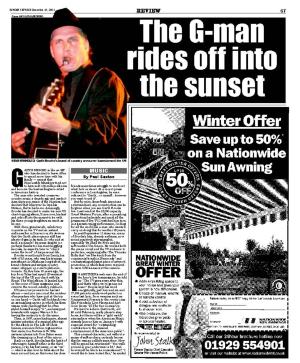