Signing a prolific striker is a top priority for Graeme Souness, and he hasn't given up on landing Robbie Fowler l Page 94.

Steve Bruce has pledged his future to Birmingham City knowing if he fails, his managerial career is over l Page 99 HE mood in the team room last night was almost as good as if we had won the second T Test and not drawn it. Coming so soon after the 10-wicket defeat in Mohali, which started people speculating about a 3-0 disaster for us, our performance here was a magnificent response from such an inexperienced side.

The Test started with some bad news for the team when we were told about Graham Thorpe's departure, but I don't think it had an adverse effect on our performance, even though he is such a talented player.

Moral win for Nasser England camp of upset by Butcher

From Colin Bateman Cricket Correspondent in Ahmedabad HE man-of the-match award in the draw of Ahmedabad went to Craig White but, in truth, it should have been handed to TEngland skipper Nasser Hussain for the remarkable transformation he has coaxed out of his team. From being dominated and beaten by two world-class spinners just a week ago, England out-played and outmanoeuvred India in the second Test at The Motera, although they could not force home the win to level the series. India captain Sourav Ganguly, facing increasing criticism for his hands-off approach to captaincy, was happy to escape with the draw and head for Wednesday's final Test in Bangalore still ahead in the series. "This is as good as this side can be and I was pleased with them. "But we still have to work out how to SCOREBOARD AHMEDABAD: Drawn ENGLAND: First Innings 407 (White 121, Trescothick 99, Butcher 51; Kumble 7-115) INDIA: First Innings 291 (Tendulkar 103, Laxman 75; Giles 5-67) ENGLAND: Second Innings 257 (Butcher 92, Hussain 50; Harbhajan 5-71) INDIA: Second Innings (Overnight 17-0) Mins Balls Runs S Das run out 204 160 58 (beaten by throw from fine leg attempting second run) D Dasgupta c Butcher b Dawson . What was gratifying was there was only an hour or two when we didn't control the game." England under Hussain are thoughtful and disciplined. 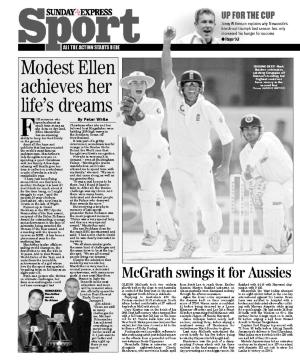 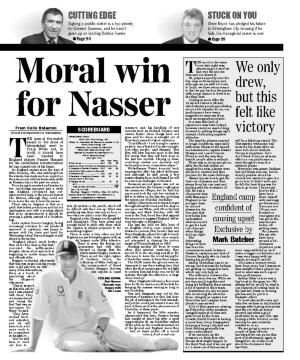