while overtime pays off for battling Harlequins

LEICESTER had 11 internationals injured or rested but were still quality.

SALE TALE: Mel Deane scores past Dan Luger Picture: VICKY MATHERS HOCKEY: India defeated South Africa 2-1 in the final of the Champions Challenge in Kuala Lumpur to qualify for the Champions Trophy for the first time since 1996.

HE last time these sides met in the Cup was in the semi-finals of 1997 and Sale went on to the final. The home side could not have hoped for a better start as England new-boy Charlie Hodgson darted clear and put centre Mel Deane through under the posts in the first minute. Hodgson converted but a string of errors from Sale allowed Quins to hit back, with Paul Burke slotting over two penalties as hooker Keith Wood led the charge as only the Irishman can. 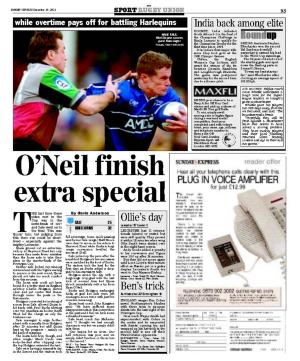