WATFORD WOLVES STEVE BRUCE marked his first home game in charge at Birmingham with a far from convincing win. The itinerant manager must have been concerned to see his new team struggle to overcome a Walsall side who finished with only ten players after Matt Carbon collected a second half red card. Considering they had managed just one draw from their previous ten visits to St Andrews, conceding 37 goals in the process, Walsall put up a brave show. But the struggling Saddlers were out of luck again on this ATHAN BLAKE was guilty of one of the misses of the season as Wolves wasted the Nchance close the gap on leaders Burnley. David Jones' Wolves took a eighth-minute lead at sub-zero Vicarage Road when Shaun Newton was allowed far too much space and headed home a Mark Kennedy cross. But Watford ? on the back of a 4-0 Worthington Cup battering at lowly Sheffield Wednesday in midweek ? equalised in the 27th minute when Tommy Smith took advantage of a miskick by Lee Naylor. Blake's horror show came two minutes after the break when Newton thumped the ball across goal but the Wales striker incredibly fluffed his shot from only a yard.

Moore's men in a fighting finish

Sheff U 2 Rotherham 2 favourites for the drop at the start of the season, went a goal down in the 48th minute when Cameroon international Patrick Suffo ran on to Peschisolido's precise pass, pulled his marker one way then the other before coolly planting the ball into the top corner from 15 yards. 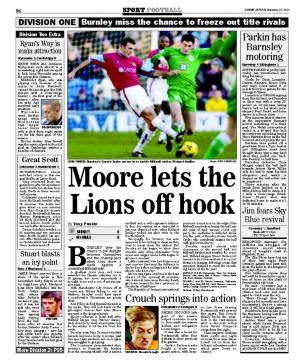 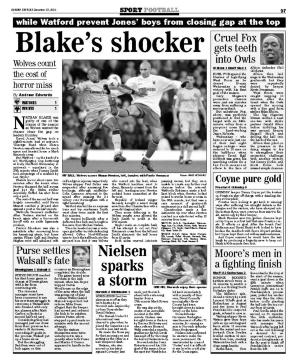