rules. " Wenger's intelligence and common sense shines through in his conversation.

106 reports RSENE WENGER has been in the vanguard of helping to clear out the drinking culture prevalent in English football ? but last night he warned about the dangers of over-reacting A and turning players into "monks". What you ask for as a manager is normal behaviour.

I want my players to go out. They can't live like monks monks

SOBERING THOUGHT: Wenger allows Martin Keown, below, and his Arsenal squad to drink if they emulate foreign stars, such as Gianfranco Zola, right, by not going over the top ? unlike shamed revellers West Ham's Hayden Foxe, far left, and Leeds United striker Robbie Fowler.

Scotland ALEX MCLEISH tasted victory in his first home game as Rangers manager thanks to two goals from Shota Arveladze and a header from Lorenzo Amoruso. 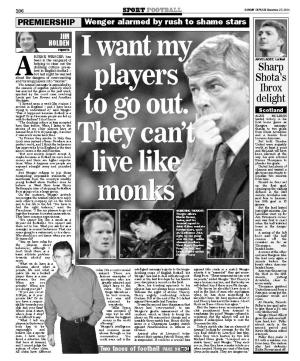