The unerring accuracy of the finish was further proof of why United were prepared to wait patiently for Van Nistelrooy to complete his rehabilitation from a career-threatening knee injury. Saints scored in the 65th minute when they capitalised on a poor clearance from Fabien Barthez, with Marian Pahars on target, before normal service was resumed, Beckham and Giggs setting up Keane for the fifth. MAN UTD (4-4-2): Barthez 7; P Neville 7, G Neville 7, Blanc 6, Silvestre 6; Veron 7 (Beckham 65, 6) , Keane 8 (Wallwork 82, 6) , Butt 7, Scholes 8; Solskjaer 7 (Giggs 65, 6), Van Nistelrooy 8.

ROY KEANE will discover in the next 24 hours whether he has aggravated a niggling knee injury which could eventually need surgery, writes John Richardson. Manchester United's skipper came off eight minutes from the end. Manager Sir Alex Ferguson, though delighted with the sixgoal spree, feels his title rivals have never had a better opportunity to end United's title dominance.

into the match on a run of four games unbeaten, were turned over by a Rovers side without a win in five before yesterday.

He said: "I would have been delighted with a point because that's all we deserved. 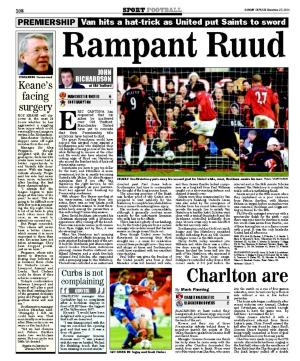 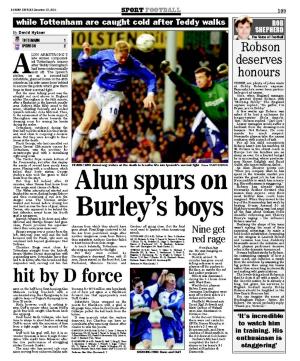