NEWCASTLE 4 HE handshake to welcome Lee Bowyer back to the Premiership came from Tthe referee ? usually the most vilified man on a football field. It was a gesture before kick-off that referee Jeff Winter had no need to make, but the moment made it clear we were all here for a top-ofthe-table football match and not a public lynching. It was a footballing triumph for Bobby Robson's team, who fought back from 3-1 down and thoroughly deserve their three-point lead at the top of the Premiership. It was Leeds' first home defeat in the League for 11 months ? further evidence of how significant this result was. Robson, now 68, has probably told his teams a thousand times down the years how vulnerable you can be when you've just scored a goal. Viduka was a particular culprit, yet the goal he scored to put Leeds 2-1 ahead in the 50th minute was outstanding as he turned defender Andy O'Brien and curled a powerful drive into the net.

French lead the chase for glory in the King George l Page 91. 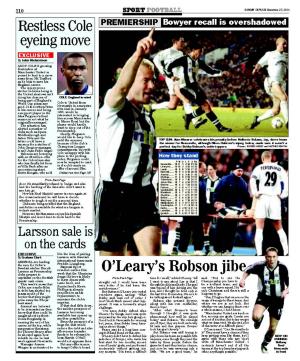 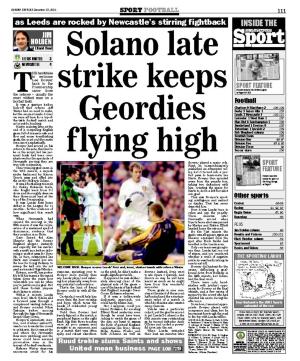