TOTTENHAM boss Glenn Hoddle defended Teddy Sheringham after the striker was sent off for apparently punching Ipswich defender John McGreal on a day of festive bad temper in English football.

Mark Viduka, the Leeds striker, had been involved in two clashes with defender Nikos Dabizas, who suffered a broken nose in the first incident and was carried off on a stretcher with leg injuries after the second.

IN TOON: Solano hit the winner in an amazing game after Bowyer had equalised for Leeds From Colin Bateman.

After his side's 2-1 home defeat against Ipswich, Hoddle said referees were under too much pressure to send off players. 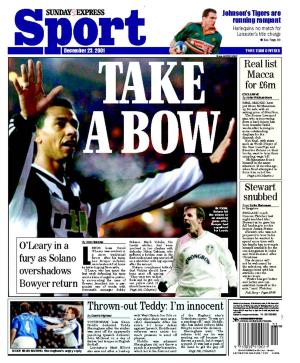