Sympathy for bomber is hard to stomach

MUCH HAS been made of the fact that Jo Tuffnell, whose father was killed in the bombing of the Grand Hotel in Brighton during the Conservative Party Conference in 1984, has been meeting with Patrick Magee, the IRA terrorist responsible for the atrocity.

IN DEFENCE of my comrades in construction, not only have we had to suffer the insults hurled in our direction by Madonna because she has fallen out with her builders, but now we have further insults from your correspondent Jane Warren ("Even Madge's millions can't speed up the British builder", Sunday Express, December 16).

An example to all immigrants

We decided to be English but Welsh culture remains in my heart", so in my view it should not be a question of immigrants being forced to like us, they should become us.

I have worked for nearly three years on no remuneration for scientific work and reduced fees for medico-legal work.

Did Leeds players get justice?

The law lords who upheld an anti-euthanasia defence showed little or no compassion for this poor woman's family, who must now daily watch her deteriorate in pain until she dies. 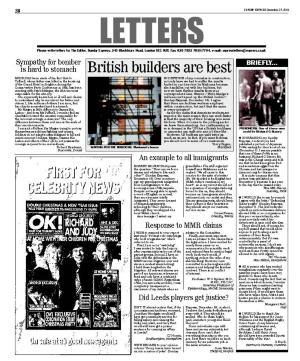 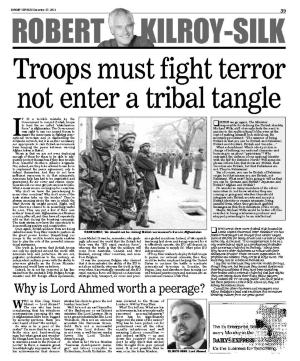