throats this Christmas over the mince pies

Camilla will marry ? but probably not until 2003.

Sex slaves and sheiks may hold clue to girl's fate

Dunne, who works for Vanity Fair, said Republican congressman Gary Condit, who admitted having an affair with 24year-old Levy, is still under suspicion.

They don't even spend a lot on their presents

THE Royals open their presents on Christmas Eve, not Christmas Day. 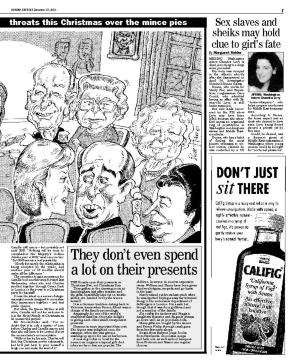