THE MORE I think about it, 2001: the more I want to see Peter Nichols's Privates On Parade again.

THEATRE REVIEW The wine is repulsive, the programmes are a rip-off, the coffee is sewage. It was a bad year for people not turning up for performances, like Martine McCutcheon, the star of My Fair Lady. The Godfather film director Frances Ford Coppola is making his debut as a stage director with a musical of his surf film no one's heard of, called Gidget.

THE NEW Year 2002: opens with the clatter of castanets as flamenco radical Joaquin Cortes comes "unplugged" to the Albert Hall in a solo show with no girls, and wall-slamming Pina Bausch, doyenne of physical theatre, shudders into Sadler's Wells for just four performances. 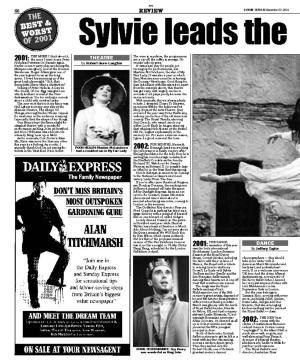